Two years ago, Mike Worrell passed away.  Mike was a great inspiration to many sailors.  To recognize his great contributions, the Great Texas dedicated a trophy to him in 2010.  This is from the dedication at the awards ceremony in 2010..... 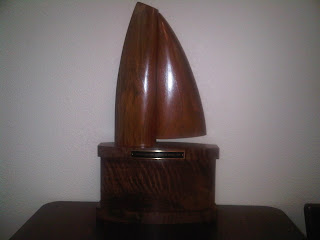 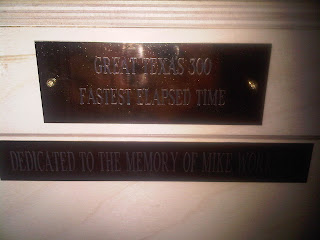 On behalf of the entire Great Texas Fleet, I am proud to dedicate this new trophy for the lowest total elapsed time in the Great Texas Catamaran Race to the memory of Mike Worrell.  The trophy will henceforth be named the Mike Worrell Memorial Trophy.  Special thanks to Dennis Banks for making this beautiful trophy.

Mike Worrell pushed the boundaries of beach catamaran sailing and in the process created a unique form of long distance racing.  The Worrell 1000 was the Mt. Everest of catamaran sailing - a 1000 mile race up the east coast that challenged every aspect of a sailor’s capabilities including boat handling, navigation, endurance, and just plain guts.

Mike Worrell was an inspiration to me and many people in the Great Texas Fleet.  After competing in the race for several years, we decided to create a mini-Worrell here in Texas, the Great Texas Catamaran Race.  Mike was always very helpful and supportive of this race.  For example, the race rules for the Great Texas are based on those from the Worrell 1000.  Mike licensed the rules to the race for $1.

Mike always followed this race and was very proud of the part he played in creating this race.  He always followed it on the internet.  After each race, we would always talk about how the race went.  I will not have the opportunity to talk to him this year but I am sure that he was in heaven this week looking down on this race with a smile on his face.

Can all those people that participated in the Worrell 100 please stand for a moment.

Finally, my favorite quote by Mike Worrell that captures the spirit of the man is his response to a question about a weather forecast on a particularly nasty day.  He responded, “The forecast does not matter because we’re going racing!”
Posted by Steve Piche at 7:55 AM No comments: